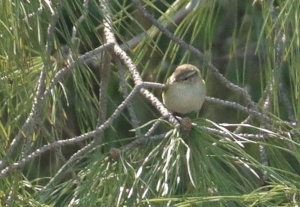 On the 5th of February, late in the afternoon, our friend Aris Vouros spotted some unfamiliar bird calls from a warbler, near the stream of Pikrodafni, a small wetland in Athens that has been suffering a lot due to urbanization. His first thoughts where soon confirmed, when he also saw the Hume’s Leaf Warbler!

As always, the good news spread in a very short time and next days many birders visited the pond in order to see and photograph the rare bird. There, with the help of Aris it was rather easy to see the tiny little visitor from central Asia in his just 2nd record for the country.